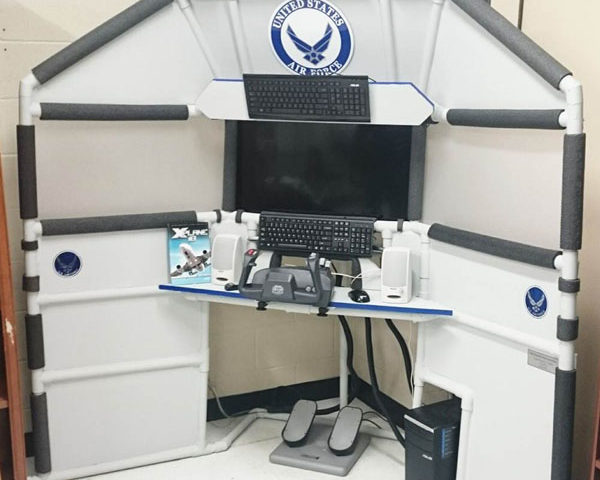 A young man named Ryan built this flight simulator for an Eagle Scout Service project. You might be wondering how a Flight Simulator Eagle Scout Project comes into being. If you are unfamiliar with service projects, the Scout must demonstrate that he has a plan for funding and building the project and he must also show that it’s a benefit to the community.
(Let’s be real: ALL flight simulators benefit the community, but I digress).

Ryan reached out to me and requested a donation of the T440 Triple Screen Flight Sim project video/manual and I granted his request. He raised enough money or donations to build the DIY flight sim as you see in the picture. He also modified the design to match his resources and needs. After completing the project, Ryan donated it to his Junior Reserve Officer Training Corps (JROTC) classroom. This is the official JROTC for the United States Air Force and the cadets use this flight simulator to learn about flying and careers in the USAF.

“Thank you so much for your flight sim plan donation for my Eagle Scout Project. As you can see I had to make some changes due to the equipment and available space in the JROTC class room… Thank you for making this project possible through your donation and helping me make the Air Force JROTC program at my high school more fun for the cadets learning about flight.”

I get requests regularly from people asking for free stuff, but I rarely fulfill those requests, even from people claiming to represent charitable groups.

There are several reasons I rarely give away free stuff