Virtual Reality for Flight Simulators, Is it Time? – Part 1

Is a Virtual Reality headset worth the money if you are a flight simulator enthusiast? It depends on the type of simulating you do. In this article I’ll tell you about my first month with the Oculus Rift headset and Virtual Reality for Flight Simulators. I’ll discuss the four different flight sim platforms I tried with VR and also the physical and financial impacts of these experiments.

The first thing you should know is this: Virtual Reality is a game changer. Accent on the word “game.”  I’ll go into more detail in a moment.

The second thing you should know: Virtual Reality costs real money, plenty of it.

I started my maiden voyage into the world of Virtual Reality for flight simulators a few months ago when I ordered an Oculus Rift. They were on backorder at the time, but even so, I received mine a full month before I expected to. VR headsets need substantial processing power to work effectively, so I bought a new computer at Best Buy and the specs are at the end of this article. I also bought a Leap Motion sensor while it was on sale so I could experiment with FlyInside FSX. If none of that means anything to you, don’t worry, I’ll come back to that in a minute.

I also upgraded an F311 Side-joystick HOTAS by making the control platforms wider to better align the controls with the armrests of my chair. Furthermore, I added a trackball mouse and a drink holder (don’t fly thirsty). I also raised the reinforcement bar so I could use my favorite rudder pedals and attached all fittings with self drilling screws. I used this F311 frame with great success, I can’t VR without it.

For these experiments, I said goodbye to my trusty Saitek switch panels and keyboard mods… you can’t see them while wearing a VR headset. Now, come with me as we explore Virtual Reality for flight simulators…

My first flight in VR was in space and it was breathtaking but just a bit disappointing. Everything worked correctly, but I found that my graphics card could not power the Oculus Rift at 1080p, so I’m temporarily stuck at 768 until I can afford a more powerful graphics card. Even so… I said the experience is breathtaking and it is. You have stereoscopic vision in VR, just like you have in real life. Your left eye and your right eye see slightly offset views of each object, so this is what makes close objects look close and far objects look far away. In Elite Dangerous, this means I could for the first time, sense the size of the spaceship’s flight deck. I could look down at my arms in the game and see how close they are and then look outside and comprehend the enormity of the space station.

The game isn’t on a screen any more, it’s all around you. You’re inside the game. This is most obvious in combat because you can look up and back and over your shoulder at your enemy. You also should be fully HOTAS so all aircraft functions are assigned to the buttons on your joystick and throttle because it’s too inconvenient to use the keyboard. That means you also have to memorize all your button assignments. One of the great limitations of VR is that you can no longer see real-world buttons and switches. However, you can use Voice Attack to simply speak commands to your spaceship. For example, you can verbally tell it to extend landing gear, and that is perfectly plausible in this futuristic environment.

Conclusion: from now on, I will only play Elite Dangerous in Virtual Reality. That’s how good it is. 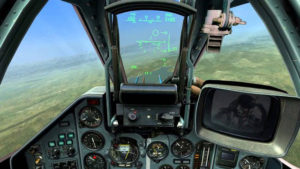 I couldn’t wait to try DCS World with the Oculus Rift, but unfortunately it didn’t go as smoothly as Elite Dangerous. First of all, the DCS menus were very difficult to use and in some cases, they just didn’t work at all. It was a time-consuming chore just to set up my Saitek X-52 HOTAS controls and rudder pedals. I flew several tutorial missions, but many of the lesson tasks required the use of keyboard commands, so I had to put my keyboard on my lap. I could kind of see the keyboard in the gap between the bottom of the Rift headset and my cheek, but this is not a reasonable option. Perhaps I could have assigned specific functions to HOTAS buttons, but there are so many of them and, again, navigating the DCS controls menu in VR is a crapshoot at best.

Disclaimer: it’s really difficult to take screen shots in Virtual Reality for flight simulators, so for this article I borrowed representative pics from other sources. This has no impact on the validity of my findings.

I appreciate the realism of DCS World, but lifting the Rift headset repeatedly to look at a paper checklist or the keyboard is a no-go. I applaud the young man in this video for diligently looking at his checklist, but every time he lifts the headset with one hand, the Rift lenses come in contact with his forehead. Be very cautious with the Rift lenses, they are delicate! Repeated exposure to sweat or hair or grease can damage the Oculus Rift lenses.

DCS World looks astonishingly great, even if it’s not fully usable. One of the aircraft I selected was the TF-51 Mustang and I really felt how cramped the cockpit is. I also tried a few landings and found them to be a more realistic experience in VR than my previous experience. Instrumentation was a little hard to read because of the lower resolution required of my graphics card. I would love to try all of this again at 1080p.

Conclusion: I won’t play DCS World again in VR until there is some work around or fix for the menus.

Read Part 2: I give Flight Simulator X a check ride, go into battle in War Thunder, and discuss the physical and financial issues of Virtual Reality for flight simulators